At TNA UK, we believe that it’s important to know the story behind a charity to establish its veracity  and its raison d’etre.  In that way, members, sufferers, potential donors and volunteers can see the progress that has been made from inception to the current day.

The 20th Anniversary of our charity is an excellent opportunity to reflect on past challenges and successes and to show year by year just what took place.

The charity was run for the first years by Professor Zakrzewska and Elizabeth, after which
5 volunteers offered their services. 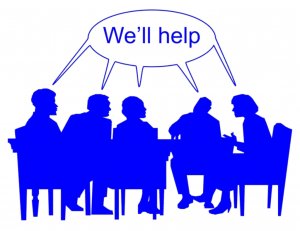 The first Executive Committee was formed 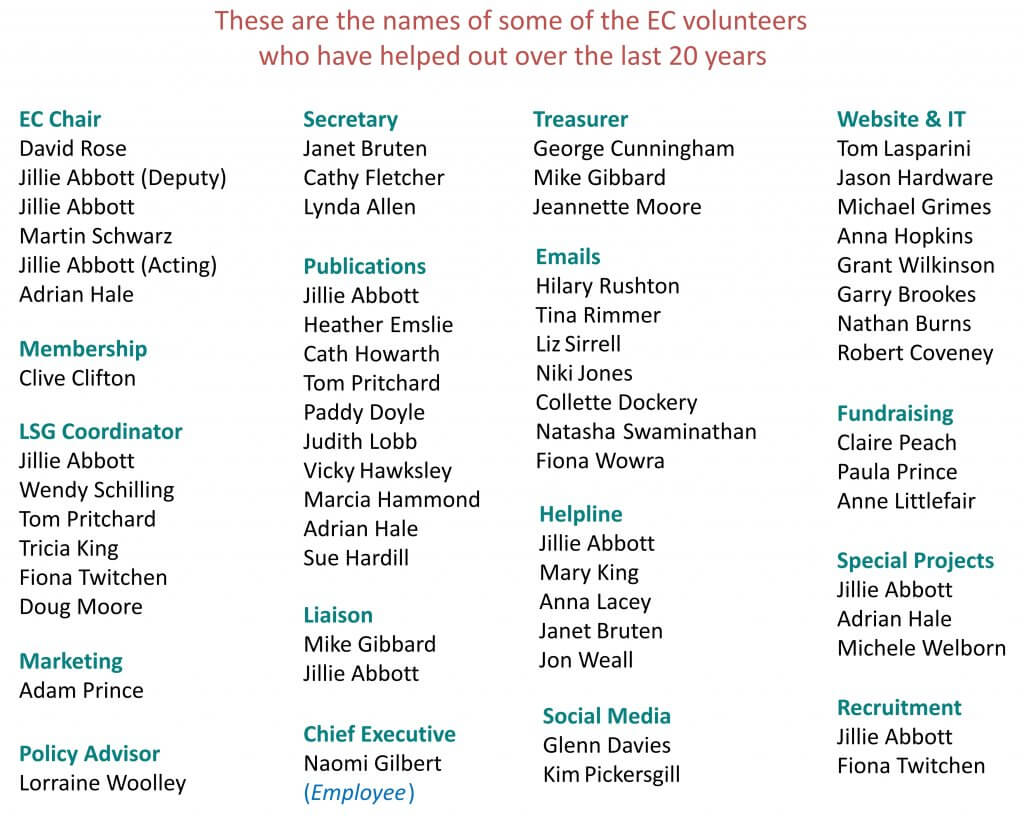 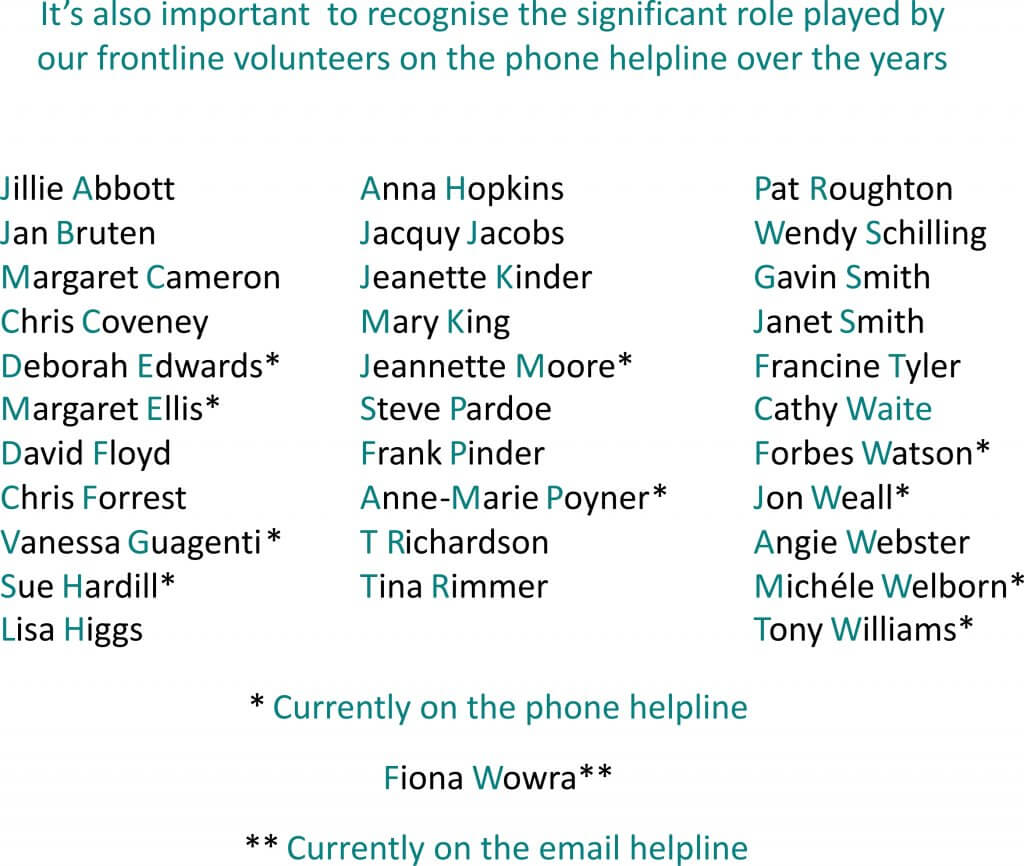 The first newsletter was produced

10,000 copies were printed of our first leaflet:

The first Medical Advisory Board was formed 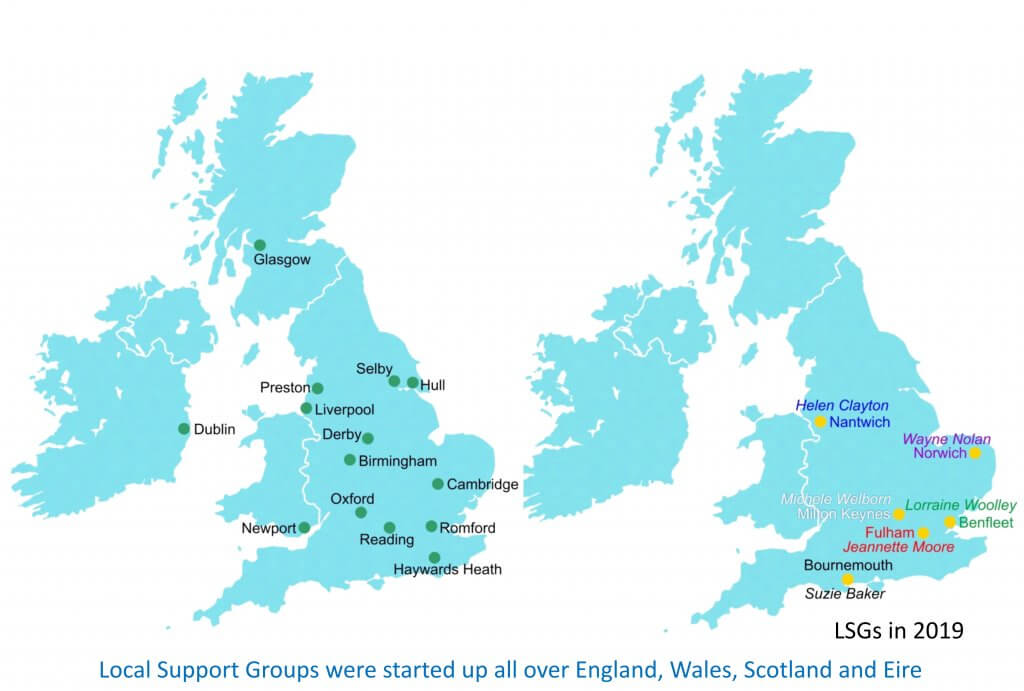 TNA UK joined the Neurological Alliance – an umbrella charity representing some 60 smaller neurological charities to give them a stronger voice in the Health Service.

The first ever TN Conference was held at Kings College, London.

The speakers were Prof Hugh Coakham, Prof Turo Nurmikko and Prof Joanna Zakrzewska (who had just received her honorary Chair)

Also present was a contingency from the USA comprising:

Dr Michael Pasternak, President of the TNA in the States, Dr Beree Darby, Immunologist and Psychologist and Rowe Jones – a  fellow sufferer and motivational speaker. 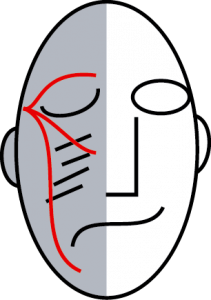 The now familiar logo was designed by David Topping and the strapline by Paula Prince.

This was the first issue of the revamped newsletter

The second new and improved version of our website

The second Biennial Conference and AGM which was held over two days.  As well as a plethora of eminent UK medics, the USA was again represented this time by Dr Ken Casey, Dr Beree Darby and Mr Roger Levy, Chair of the TNA USA Board of Directors.

The Association finally moved out of Carole Straker’s home in Bromley to our current office in Oxted.

Because of the nature of TN, we have often been told just how useful the alert card has been in situations where the public was concerned by seeing someone who was clearly upset and in pain.

Throughout each of the twenty years of TNA UK various members of the EC have travelled all over the country attending conferences and/or exhibitions and taken our stand and leaflets to raise awareness of TN.

Unfortunately in more recent times, a number of the organisations where we exhibited free of charge, now either don’t allow exhibitors or charge a fee which is too high to make it worth our while.

The new website was launched in the winter of this year 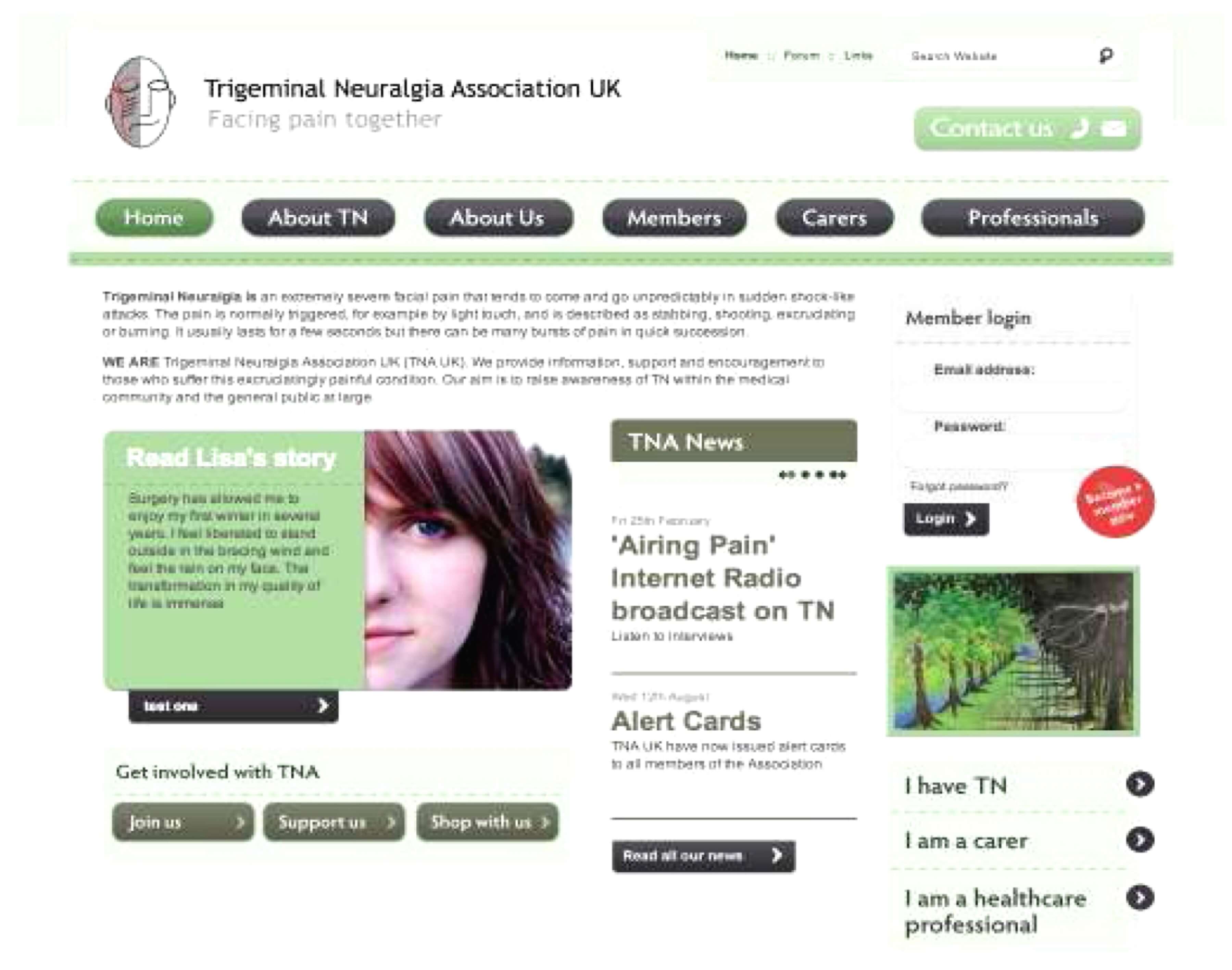 Jim Fitzpatrick MP – a sufferer and staunch supporter of TNA UK secured The Final Adjournment Debate on TN in the House of Commons.

The first videoing of an AGM and Study Day at the Grand Connaught Rooms, Covent Garden

The format of the newsletter changed 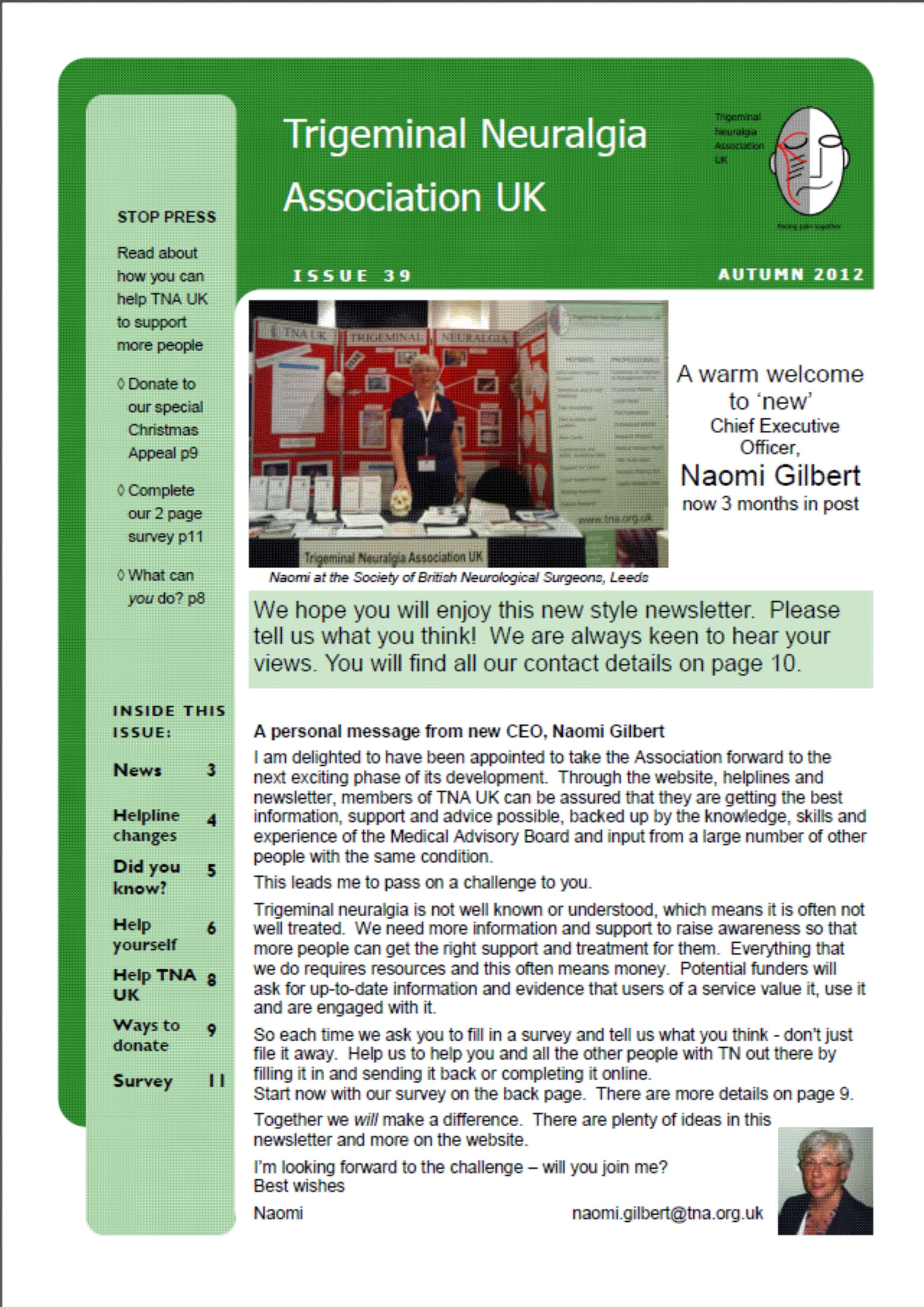 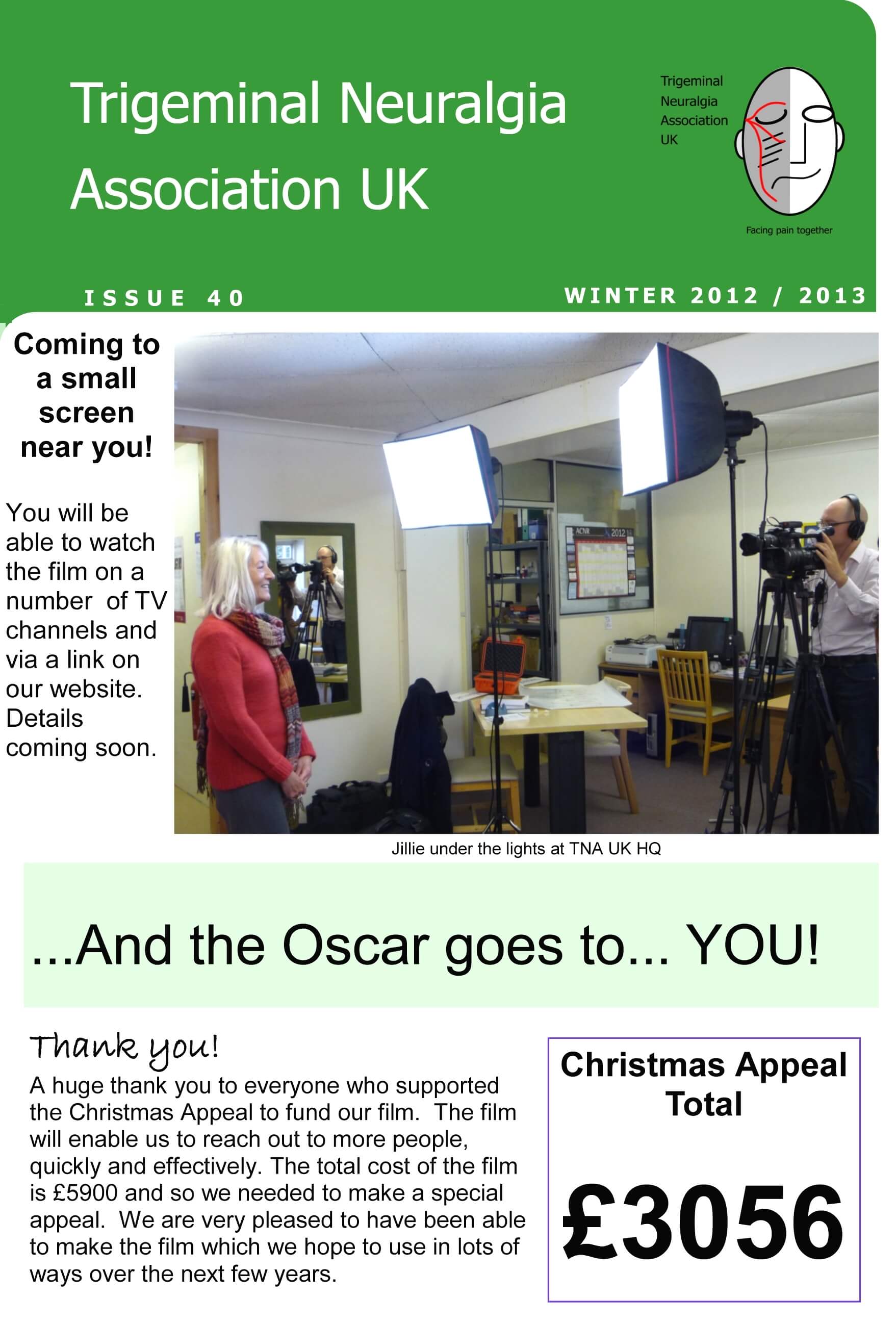 Dr David Bateman at the Public Accounts Committee meeting where he was advised that his postition as National Clinical Director for Neurology would no longer exist.

Several members of our Executive Committee attending an All Party Parliamentary Group in the House of Commons.

Professor Zakrzewska’s intention to set up a Trigeminal Neuralgia Institute will be able to provide the following:

A diagnostic service and treatment plan

Setting up of a network of centres throughout the UK

As members of the Neurological Alliance we attend many meetings arranged by them or in which they are involved.

A Dental Essay Competition was held for undergraduates

Adrian was made a Fellow of the Institute of Administrative
Management for his charity work.

A second phone line was installed for Admin queries

It goes without saying that every charity benefits from fundraising and TNA UK has been fortunate that thousands of pounds has been raised by both members and non-members.  Similarly we have received many bequests over the years and we have now produced a leaflet on Leaving a Gift in Your Will.

We are extremely grateful to both members and non-members who have underken a variety of challenges such as wing-walking, climbing mountains, running marathons, baking and knitting to support our Association.

In order to modernise and improve accessibility via desktops, laptops, tablets and mobiles, the website was revamped.

TNA UK at the House of Commons.

Thanks to Jillie and Robert working with Andrea Jenkyns MP and the efforts of our members, we were able meet MPs in Portcullis House.

Portcullis House on the Embankment

The atrium of Portcullis House

Those of you who have looked at the Research page in the Members’ area of the website, will see that we have a number of projects on the go and we’d just like to update you on their progress on three of them.

Cognitive and motor impairments experienced by TN patients
At the request of the research supervisor, Adrian has agreed to an extension of the completion date to 18th November 2019 for this project.  An interim report on progress confirmed that 46 participants had been tested and it was now a question of engaging more people to act as the control group in order to verify the results.  Without that control group, the unsubstantiated indications are as expected in that TN sufferers on medication are susceptible to cognitive and motor impairment.

Core outcomes in trigeminal neuralgia
This is a three-year study by Dr Carolina dos Santos Venda Nova who works alongside Prof. Zak.  Core Outcome Measures (COMs) are essential if there is to be a method of determining whether it is better to treat a patient with drugs as opposed to using surgery to achieve a similar result.  We have agreed to fund her first year of research and it may be that we will be able to help out in years two and three if a grant is not forthcoming.  Carolina started her work in September last year and has been reviewing the existing literature about COMs in TN before the real work can start.  There is no point in establishing a new COM if similar work has already produced a viable result – however this is unlikely but checks need to be made and involves a lot of work researching numerous existing papers on the subject.

Wrist monitor
Since it was decided that a method of providing evidence of the effects of TN in order to support what we already know – but cannot prove – unfortunately progress has been very slow.  Much of the delay has been caused by a failure in the technology supplied by Activinsights and therefore we have returned to ADI to discuss again the whole issue of what we want to achieve and how they can help us do that.

Once a wearable device has been piloted and some data analysed, this device or others need to be modified to record more data that would be useful for patients to help them take more control over their medication, reduce the risk of depression and improve quality of life.  The device may need to be combined with a smartphone app to record more useful data not required in real time but which would help to optimise management.

There is little scientific data on how the pain attacks may change over time in respect of length, remission and relapse periods, location, provoking factors and/or response to medications.  How this may be achieved is still a matter for discussion as to whether changes in a person’s physiological circumstances can be beneficial in determining the effect of an attack, e.g. changes in heart rate, blood pressure, perspiration, or involuntary movement.

The current medications are very effective at pain control but result in significant adverse side-effects which are dose-dependent.  A careful balance is therefore needed for the most efficient dosage scheme which could be achieved with a wearable device.

Other research
In view of the fact that research involving a rare condition can mean high costs, Prof. Zak has been making various applications for grants so that we can undertake research projects. The James Lind Alliance (JLA) method, described in the JLA Guidebook, is designed to change the way research funding is granted, and to raise awareness of research questions which are of direct relevance and potential benefit to patients and the clinicians who treat them.  The National Institute for Health Research (NIHR) funds the infrastructure of the JLA.  If we were to get large legacies for further research then it may be useful for TNA to do a JLA project so we have a better idea of what our priorities are and which projects we want to fund.

By March we will have new European guidelines and we would have analysed some long-term data on Prof. Zakrzewska’s cohort of TN patients which she has followed up – in some cases for up to 10 years.

Professor Zakrzewska receiving the prestgious award of the Charles Tomes Medal having just given the annual Charles Tomes lecture at the Royal College of Surgeons.

Whilst most members of the Medical Advisory Board are involved in travelling abroad to participate in speaking engagements, we have singled out Professor Zakrzewska to illustrate the extent to which she has gone to lecture about trigeminal neuralgia as well as to learn from others.  The list below is incomplete insofar as it doesn’t show that Professor Zakrzewska has visited several of these places more than once and in fact has made over seventy journeys in the twenty years of our existence.  See below the image for the list of places visited – we’ll leave it to you to identify them on the map!